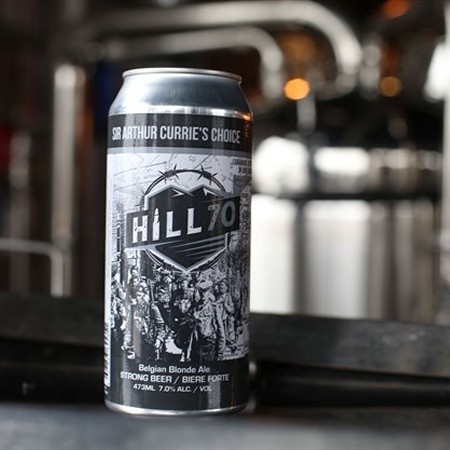 SMITHS FALLS, ON – 4 Degrees Brewing has announced the release of a new beer that pays tribute to a nearly forgotten event in Canada’s military history.

The Battle of Hill 70 took place on August 15th to 25th, 1917 near Lens, France, with Canadian troops led by Sir Arthur Currie fighting German troops under Otto von Below. During the 10 days of action, over 9,000 Canadian soldiers were killed or wounded, but the Germans suffered much greater losses, with more than 25,000 killed or wounded. Six Canadians were awarded Victoria Crosses for their bravery, the highest amount for any Canadian battle in the First World War.

The battle was brought to the attention of the brewery by Blake Seward, a teacher at Smiths Falls District Collegiate Institute (SFDCI) who is responsible for the Lest We Forget Project in which students research and digitize Canada’s military services files. This led to the creation of a commemorative beer which has been released just in time for the 100th anniversary of Armistice Day this weekend.

Hill 70 (7% abv) is a Belgian-style blonde ale with the following notes:

Hill 70 is dry, and crisp with notes of apple, pears, banana, clove and spice. The complexity of the fermentation process and the hops and esters from the yeast, give it a delightful, fruity background – leading up to a very clean finish, with little after taste.

Hill 70 is available now in cans and on tap at 4 Degrees Brewing, with 25 cents for every beer sold going to the Hill 70 Memorial Project. For more details, see the recent feature articles at the Smiths Falls Record News and The Globe & Mail.