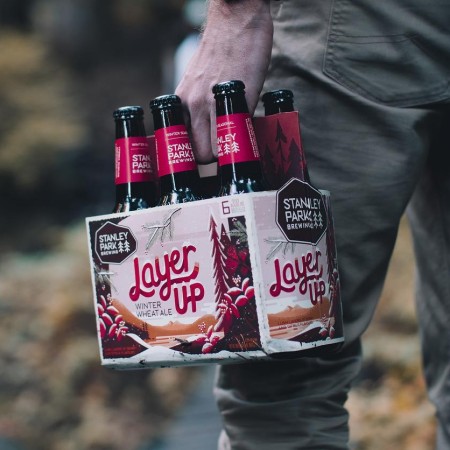 VANCOUVER, BC – Stanley Park Brewing has announced the release of a new seasonal beer for the cooler months.

Layer Up (5.2% abv, 18 IBU) is a Dark American Wheat Ale brewed with fig, raspberry, orange and ginger (aka FROG) and dry hopped with Amarillo, with the following back story:

The creation of Layer Up was inspired by a trip to the World Beer Cup in Nashville. After tasting a Southern treat – olive oil cake with FROG jam – the Stanley Park Brewing team found a way to infuse these unique ingredients into a darker winter beer! They trialled 15-20 batches and decided to name it Layer Up, as it’s about embracing the season and reflects the layers of the beer. At first you smell the raspberry, then you taste the orange and fig and end with a refreshing finish with ginger.

Layer Up is available now at select retailers and licensees throughout British Columbia and Alberta.