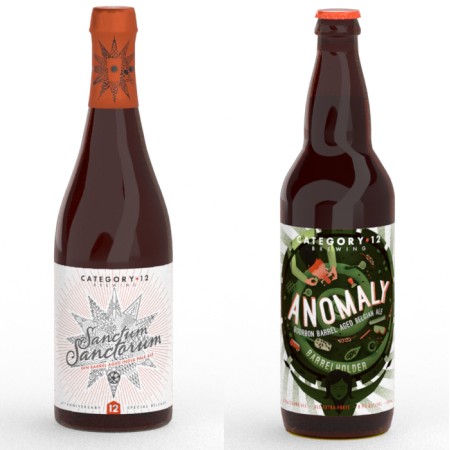 VICTORIA, BC – Category 12 Brewing has announced details of the next installment in the Elemental Series of experimental and innovative beers, as well as a new edition of a release from its Barrelholder program of strong barrel-aged beers.

Sanctum Sanctorum is the latest Elemental release, and is a gin-barrel aged IPA described as follows:

If you possess this bottle, your dedication to the raw magic of zymergy is apparent. Reward comes as your tastebuds transcend known realities to experience the nexus of wonder as botanical, gin-barrel goodness from Sheringham Distillery and Saccharomyces trois. beer come together. The most superlative creation our Dr., and team, could create is now at your own fingertips. Enjoy.

Anomaly is a bourbon barrel aged Belgian-style ale with the following notes:

Both beers will be released on Saturday December 8th as part of celebrations to mark the 4th anniversary of Category 12. For more details and to reserve tickets to the party, see the Eventbrite listing.