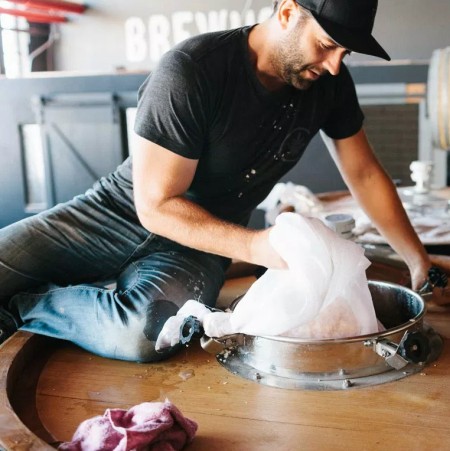 TORONTO, ON – Rainhard Brewing has announced details for one of a pair of new limited edition beers that debut during its 4th annual Holiday Party this coming weekend.

Dark Fire (5.5% abv) is a stout that was the first beer to be brewed and aged in the foeders installed at the brewery earlier this year. It’s described as follows:

This isn’t just a regular stout. We added some delicious toasted coconut, some scotch bonnet peppers and some delicious cacao nibs from our good friends at SOMA Chocolate Makers. And just to round things out, we blended a little bourbon barrel-aged stout in for good measure. The final product is something special. It’s a full bodied stout, packed full of delicious coconut aroma immediately. The coconut carries through on the pallet and then the peppers bring in a nice spice. The finish is chocolatey and smooth. This winter warmer was a labour of love and we’re so excited for you to try it.

Dark Fire will be released on Saturday December 1st at Rainhard alongside a second barrel-aged beer still to be announced. For more details, see the Rainhard Holiday Party event listing on Facebook.