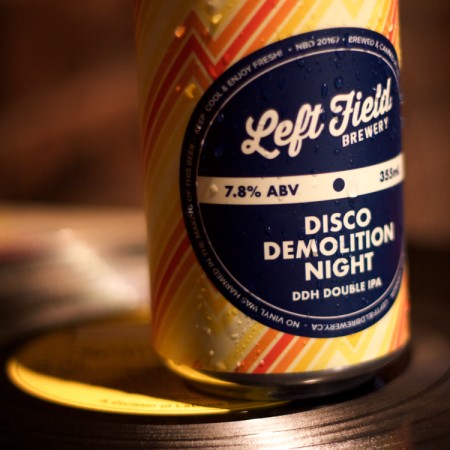 TORONTO, ON – Left Field Brewery has announced the release of a new beer that commemorates an infamous night in both baseball and music history.

Disco Demolition Night (7.8% abv) is named after a promotion held on June 12, 1979 by the Chicago White Sox and rock radio station 97.9 WLUP in which fans could attend a double-header with the Detroit Tigers for just 98 cents if they brought a disco record to be destroyed in an on-field explosion between the two games. The event turned into a disaster when over 50,000 fans showed up – more than three times the usual crowd for a Sox home game – with many of them rushing the field and rioting after the explosion, forcing the second game to be forfeited.

Disco Demolition Night – the beer – is described as “an explosively juicy double dry hopped double IPA bursting with tropical flavours of orange, pineapple and hints of gentle strawberry [that is] better suited for listening to great records than blowing them up.”

Left Field has also provided a Spotify playlist to pair with the beer featuring “the awesome music that was ridiculously destroyed on that ill-fated day in 1979 and other disco-inspired favourites.” Check it out below: