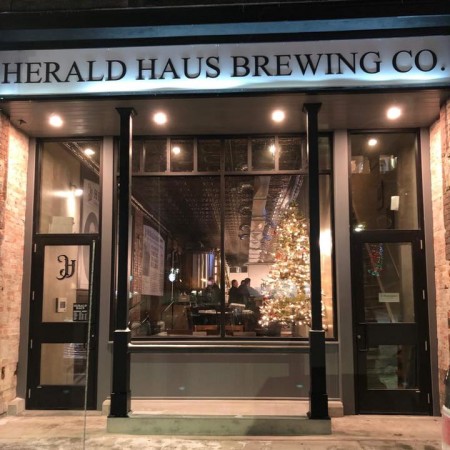 STRATFORD, ON – A brewery and taproom located in one of Stratford’s most notable historic buildings has announced that it will be opening its doors to the public later this week.

Herald Haus Brewing has been established Daniel and Cathy Graver in the Herald Building at 21 Marketpace, the original home of the Stratford Herald newspaper. Brewing has been underway and beers have been on tap at several local bars since earlier this year, while work was being completed on the taproom and retail space.

Food for the taproom is being provided from the kitchen of The Hub and Bard’s Steakhouse , located next door at 27 Marketplace. Beer sales will initially be limited to draught pours at the bar, with growlers and cans to be available in coming weeks.

Herald Haus Brewing will open on Friday December 14th, with business hours of 11:00 AM to 9:00 PM daily with the exception of Mondays. For more details, see the brewery’s website and Facebook page.

[CORRECTION: An earlier version of this article stated that Herald Haus Brewery is owned by the same company as The Hub and Bard’s Steakhouse, and that the Herald Haus beers available since earlier this year were being brewed elsewhere under contract. It has been corrected to reflect the proper ownership and brewing details. CBN apologizes for the errors.]