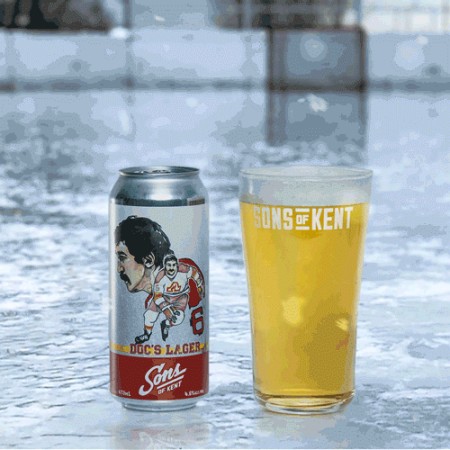 CHATHAM, ON – Sons of Kent Brewing has announced the release of a limited edition beer that pays tribute to a famous local resident who passed away earlier this year.

Doc’s Lager (4.6% abv, 30 IBU) is named in honour of Ken “Doc” Houston, an NHL player born in Dresden, Ontario who played for the Atlanta/Calgary Flames for most of his decade-long career in the 1970s and 1980s. He died at his home in Chatham on March 10th following a battle with cancer.

Doc’s Lager has been released to mark the renaming of the hockey arena in Dresden to the Ken Houston Memorial Agricultural Centre. Cans of the beer sold out on the day of release last Friday, but it remains on tap at the brewery while supplies last.