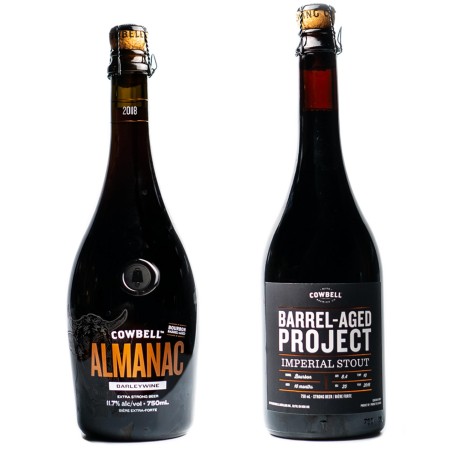 BLYTH, ON – Cowbell Brewing has announced the first two releases in the Barrel-Aged Project, a new series of limited edition barrel-aged beers.

ALMANAC 2018 was brewed at the Cowbell Farm on opening day, August 5, 2017, [and] aged beautifully until its release on Cowbell’s first anniversary. This beer is a rich, full-bodied and gorgeous Barleywine. It has been matured for an entire year, left unfiltered and unpasteurized prior to being placed in a barrel.

These special editions of ALMANAC 2018 and Imperial Stout Braggot were aged in freshly emptied Kentucky bourbon barrels, resulting in beers that are “complex and multidimensional that may be enjoyed right away or left to age beautifully for years to come.”

Both beers are available now in 750 ml corked-and-caged bottles at Cowbell Brewing while supplies last.