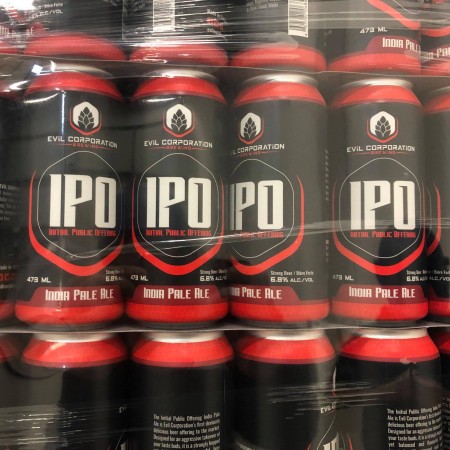 CALGARY, AB – A new brewery with a name and ethos that satirizes corporate culture has released its first brand in Calgary.

Currently brewing under contract at Last Spike Brewery while planning a bricks-and-mortar location, Evil Corporation has entered the market with the appropriately named Initial Public Offering IPA (6.5% abv), which is described as follows:

Initial Public Offering IPA is a robust West Coast Ale typical of the style. It is well balanced leaving a refreshing note on the palate with subtle malt forward and sweet undertones. Brewed with Citra, Crystal and Magnum hops to give it it’s distinctive flavour, it is also dry hopped for ten days using the same hop profile even using the Magnum instead of more floral varieties as is the norm.

Initial Public Offering IPA is available now in cans at select liquor stores and on tap at craft beer bars in Calgary.