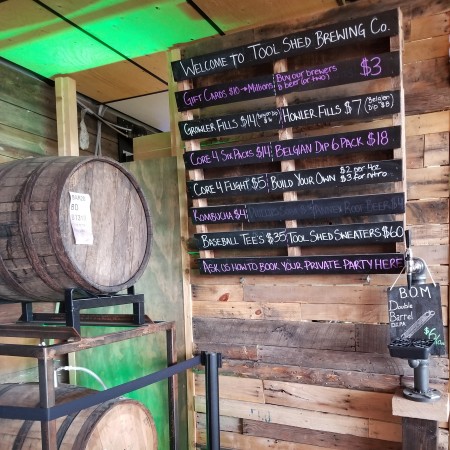 CALGARY, AB – In what may be a first for Canada, Tool Shed Brewing has announced that it is now pouring barrel-aged beers directly from the barrel in its brewery taproom.

Tool Shed’s “Barrel-O-Matic” is a customized version of the Rack AeriAle system [which] was developed in partnership between Dogfish Head Craft Brewery and AC Beverage, a beer and draft system design and installation company. The system allows you to enjoy chilled barrel-aged beer straight from the aging barrel. The system automatically injects nitrogen into the top of the barrel to avoid oxidation. The beer is flash cooled on the way to the tap, and you, the Pint Holder, are guaranteed to have a perfect nitro-dosed cool, creamy beer, infused with unique spirit flavours from the barrel.

The first Tool Shed beer to be served via this method is a Double IPA aged for 9 months in a bourbon barrel, with others planned to follow soon.