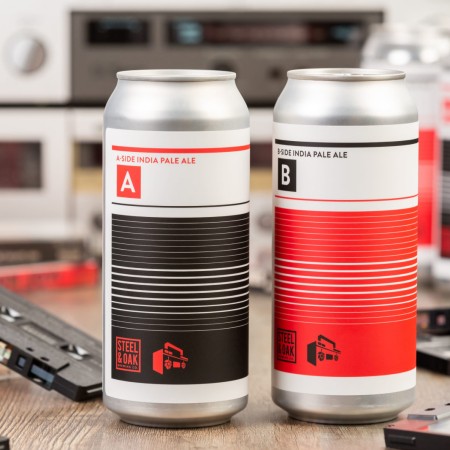 NEW WESTMINSTER, BC – Steel & Oak Brewing has announced the release of a new collaborative mixed pack with Boombox Brewing.

The A-Side & B-Side IPA 4-pack contains two cans each of a pair of different IPAs, described as follows:

A-Side has all Northern Hemisphere ingredients including Citra, Azacca, and Equanot hops from the US as well as Superior Pilsner Malt from Alberta and Marris Otter from the UK.

B-Side has all Southern Hemisphere ingredients including Waimea and Rakau hops from New Zealand and Galaxy from Australia as well as Patagonia Pilsen Malt from Chile.

A-Side and B-Side are both fermented using the same yeast and pour a hazy straw colour.

A-Side and B-Side will be launching tomorrow (January 16th) at all three locations of Colony Bar, where the two new beers will be on tap along with a selection of other beers from both breweries. Following the launch, the 4-pack will be available at Steel & Oak and select private liquor stores while supplies last.