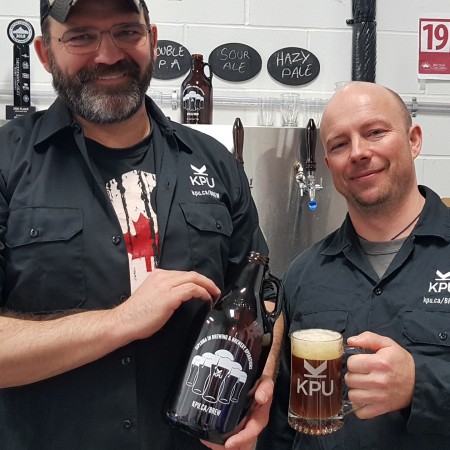 LANGLEY, BC – The Kwantlen Polytechnic University (KPU) Brewing Program has announced the launch of a series of 10 signature beers brewed by second year students as a part of their final semester in the program.

The first release in the series is Kapoentje (5.2% abv, 24 IBU) – Dutch for “little rascal” – which is a Belgian Pale Ale developed and brewed by Sacha Bordas and Luc Vreys. It’s described as having “notes of bread, malt, caramel and fruit.”

“We decided to focus on making a traditional, basic beer style and do it really well,” says Vreys in a press release. “I’m from Belgium where Pilsners are common. If I wanted to drink something different at home, I went for a Belgian Pale Ale, which is why we chose to make this beer for our signature-recipe project.”

Kapoentje will be available for growler fills starting tomorrow (January 25th) in the KPU Brew Lab brewery on the Langley campus. Bordas and Vreys will be on hand from 1:00 to 6:00 PM to talk about their beer.

The other nine signature beers will be released over the next three months, with dates and details to be announced on Facebook and Twitter as they are confirmed.