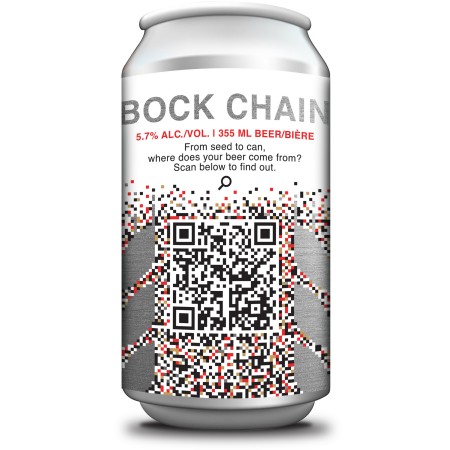 CALGARY, AB – Last Best Brewing & Distilling has announced details of a new beer that uses blockchain technology to allow drinkers to “trace the beer grain ingredients from field to can.”

Bock Chain (5.7% abv) is a strong lager that been created in collaboration with Hamill Farms, Canada Malting, Red Shed Malting, and technology company TE-FOOD to illustrate how blockchain is being used to “facilitate traceability in food ingredients, giving consumers greater visibility over where their food comes from, how it’s been processed and what it has been in contact with.”

As described in a press release:

For Bock Chain, the barley was grown and harvested at Hamill Farms in Penhold, then traveled to Canada Malting in Calgary for malting, then to a third-party lab for quality assurance, on to Red Shed Malting in Penhold for roasting, and finally to Last Best Brewing & Distilling in Calgary for brewing and packaging.

Each can of Bock Chain features a QR code that can be scanned to view photos, videos, maps, and other details about the journey of the barley from farm to brewery.

Last Best Bock Chain will be officially launched on Friday February 1st at the Jasper Beer & Barley Summit. It will be available in cans at beer retailers throughout Alberta.