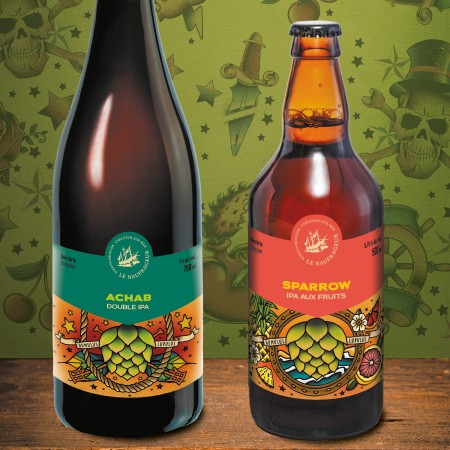 CARLETON-SUR-MER, QC – Microbrasserie Le Naufrageur has announced details of a new IPA series that has launched with a pair of debut releases.

Achab puts forward the extravagance of American and Australian hops; the sharp bitterness of the west coast and the typical fruity and aromatic profile of the east coast. The name honours the maritime legends of the US East Coast through Captain Ahab, whose obsession with the most famous of sea monsters, Moby Dick, dragged him into the unfathomable depths of hostile seas.

Sparrow uses tropical fruits (pineapple) and citrus (pink grapefruit and blood orange) to complement a happy hop assortment from the US West Coast, Australia and New Zealand. It takes its name from the famous pirate of the Caribbean, the bold and colourful Captain Jack Sparrow, who has sowed terror on the warm waters of the South Seas while still finding something to quench his thirst.

Both beers are available now – Achab in 750 ml bottles, Sparrow in 500 ml format – at select specialty beer retailers throughout Quebec.