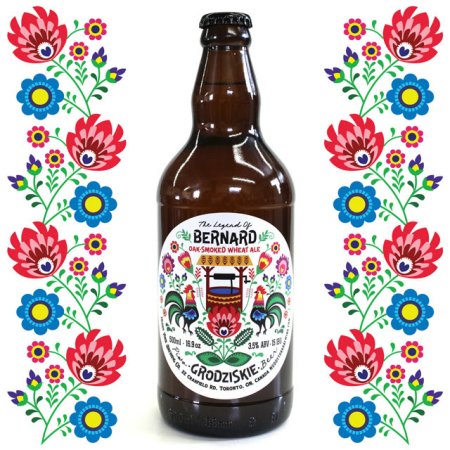 TORONTO, ON – Muddy York Brewing has announced the release of its version of a distinctive and rarely seen beer style.

The Legend of Bernard Grodziskie (3.5% abv) is a grodziskie, a traditional Polish beer that is “brewed with 100% oak-smoked wheat malt, [has] high levels of carbonation, a unique mineral character, and [is] typically less than 4% ABV.”

The name of the beer pays tribute to the following folk tale:

Bernard of Wabrzeźno was a Benedictine monk who, legend has it, prayed that the depleted well of Grodzisk be replenished so that the town-folk would be able to continue to produce beer – their primary source of income. Bernard’s prayers resulted in magically refilling the well water and purportedly giving it healing powers; curing any ill person who drank from it. The new Grodzisk-style beer produced using Bernard’s miraculous water was said to be superior to any they’d brewed before.

The Legend of Bernard Grodziskie will be released on Saturday February 2nd in 500 ml bottles and on tap at the Muddy York retail store and taproom.