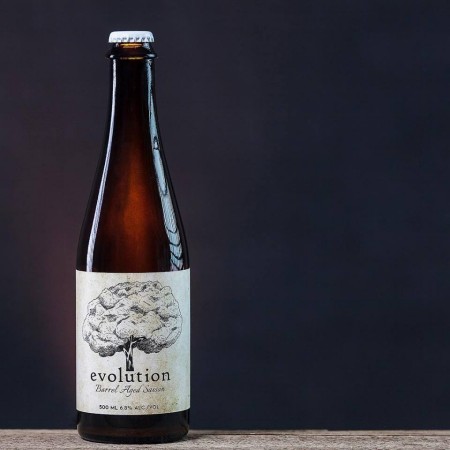 HANWELL, NB – Niche Brewing has announced the release of a beer almost a year in the making as its first bottled offering.

Evolution (6.8% abv) is a barrel-aged Saison described as follows:

Brewed with a grist of Pilsner, Rye, Vienna and Wheat malts, it was lightly hopped with Huell Melon in the boil. Fermented in a single Chardonnay barrel with our house culture of Saccharomyces and Brettanomyces yeast strains, it was aged in the barrel for about six months before packaging with Champagne yeast. Conditioned for another two months, it’s ready to be consumed now, or aged for opening later. It’s tasting lightly fruity, funky, and with a good amount of oak character to go with the funk. The carbonation is quite high, as is typical for the style, so be sure to chill it appropriately before opening.

500 ml bottles of Evolution are being distributed now to ANBL locations throughout New Brunswick. For more details on availability, see the Niche Brewing Facebook page.