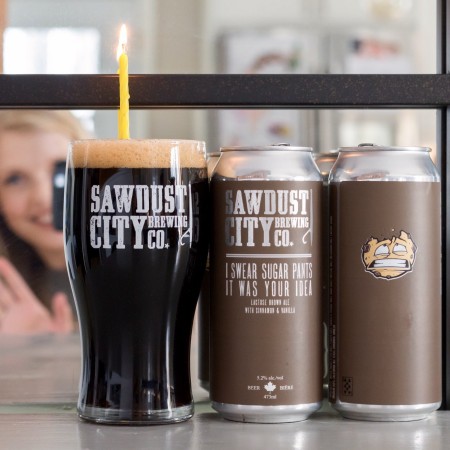 GRAVENHURST, ON – Sawdust City Brewing has announced the return of a winter seasonal favourite as the sixth of its 52 weekly beer releases for 2019.

I Swear Sugar Pants It Was Your Idea (5.2% abv, 24 IBU) is a brown ale brewed with lactose, cinnamon, and vanilla, and described as follows:

Pouring a robust and enticing brown, this malt-forward ale leads with delicate aromas of spicy cinnamon and luscious vanilla. The flavour is rich and fully-loaded with cocoa, roasted malt, nuts and doughy baked bread. A great ‘pint’ with a silky smooth body, best enjoyed in the company of a second one.

I Swear Sugar Pants It Was Your Idea will be available tomorrow (February 7th) at the Sawdust City retail shop and online store, as well as select beer bars in Ontario, while supplies last.