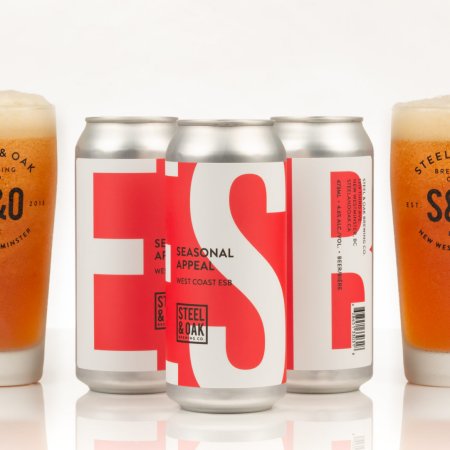 NEW WESTMINSTER, BC – Steel & Oak Brewing has announced that one of its early core brands has returned under a new name and in a new format.

Seasonal Appeal (4.6% abv) was originally known as Dry Hopped ESB, but as the brewery notes:

Like many ESBs before it, it suffered from being called an ESB (a style which not a lot of people know), and riding that hop-forward Ale category while being below the 5% threshold. It has all the qualities of a beer we like. It was refreshing, it was hoppy, it was balanced, and it was lower ABV. People loved it […] but not enough people bought it over time to make it viable for us to keep it under the Flagship lineup. We changed the name to West Coast ESB, then considered changing it again to a Pale Ale but thought that was disingenuous to the style that we were trying to achieve. Eventually we just decided to nix it all together and bring it back at a later date for those of you who missed it, us included.

Seasonal Appeal will be available for a limited time in 473 ml cans – its first time in that package – at Steel & Oak and select private retailers.