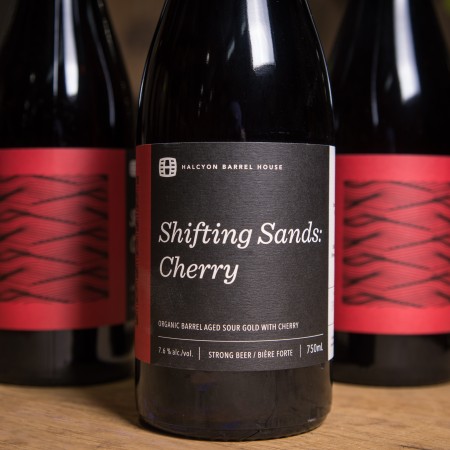 VANKLEEK HILL, ON – Halcyon Barrel House – an off-shoot of Beau’s All Natural Brewing dedicated to mixed fermentation and barrel-aged beers – has announced the latest in a series of limited edition fruit beers based on the sour golden ale Shifting Sands.

Shifting Sands: Cherry pours undisturbed, a perfect cherry red hue. The aroma is cherry first and foremost, with notes of dried fruit and cherry pie. The flavour is undeniably cherry-forward, lots of tangy tartness with light wine notes backing up the dominant cherry character. The body is light, with moderate carbonation, and dries out after each sip with lingering cherry flavour.

Shifting Sands: Cherry will be released in early March in 750 ml corked & caged bottles at the Beau’s retail store.