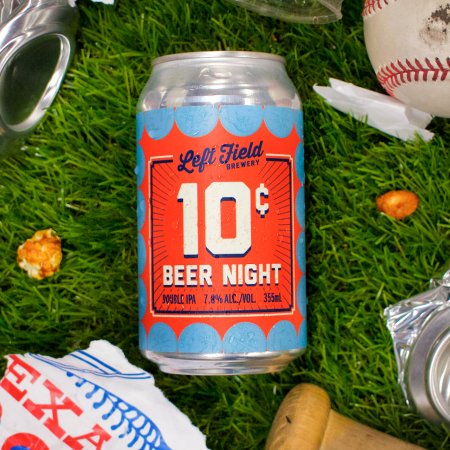 TORONTO, ON – Left Field Brewery has announced the release of a new beer inspired by an infamous event in baseball history.

10¢ Beer Night (7.8% abv) is a Double IPA named after a promotion that took place on June 4, 1974 at Cleveland Stadium, and led to a riot that ended a game between the Cleveland Indians and Texas Rangers in a forfeit.

The beer is described as being “deliciously packed with Nelson Sauvin and Citra hops for an extra juicy wallop of orange, peach, gooseberry, grapefruit and lychee flavours finishing medium dry with a restrained hop bitterness.”

10¢ Beer Night is available now on tap and in 355 ml cans in the Left Field taproom, with cans also available via the brewery’s online store while supplies last.