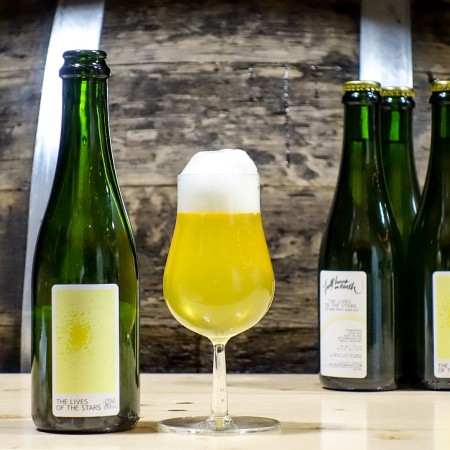 SEAFORTH, ON – Half Hours on Earth has announced the release of a new limited edition oak-aged sour ale with peaches.

The Lives of the Stars (5% abv) is described as follows:

Peaches are an extremely subtle fruit when added to beer, so we needed a very delicate base to work with. We found it a year ago last March with a single barrel that had the ideal characteristics we were looking for. A light farmhouse sour ale that had been brewed with a simple recipe of Pilsner malt, flaked barley (for body, texture and mouthfeel) and hopped with Saaz. It was oak fermented and rested for a total of five months in a neutral oak wine barrel. The beer was clean and crisp, with a very mellow funk and a soft acidity. With peaches in mind while pulling samples from various barrels, we knew this was without a doubt the best candidate.

We racked the beer into our fruiting tank on top of whole peaches at the rate of over 400 grams of peaches per litre of beer. We allowed the beer to re-ferment on the fruit for an additional two months. The beer was then very lightly dry-hopped with El Dorado before the entire batch was packaged into 375 ml bottles for one more refermentation in the bottle. Bottle conditioned for five months, bringing us to today, a full year in the making. The result is a spritzy little spring beer, brilliantly clear, with lively carbonation. Extremely well balanced with bright peach aromatics and flavour throughout.

The Lives of the Stars is available now in 375 ml bottles at the Half Hours on Earth brewery store and online shop while supplies last.