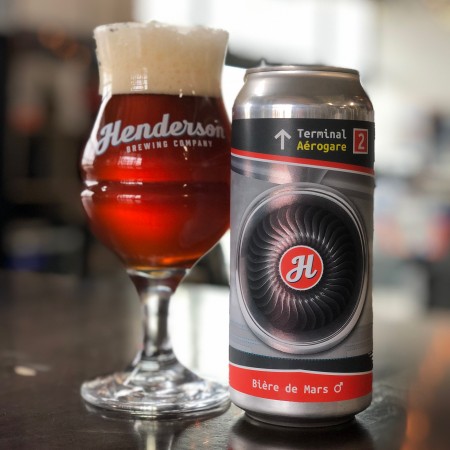 TORONTO, ON – Henderson Brewing has announced details of the latest in its Ides Series of monthly limited edition beers, with this month’s edition inspired by the “quirky and unique terminal-numbering system” of Toronto’s Pearson Airport.

Terminal 2 Bière de Mars (6.4% abv) takes its name from a terminal that was closed in 2007 when Terminal 1 expanded, leaving the airport with Terminal 1 and Terminal 3 but nothing in-between. It’s described as follows:

The Bière de Mars, which literally translates to “Beer for March” was traditionally brewed only for the month of March. Terminal 2 is inspired by the classic farmhouse ales of France, which were brewed in Spring, but could be enjoyed year-round.

“A Bière de Mars is a traditional French farmhouse beer style. Think of it as the malty cousin of Saison.” explains Henderson brewer Tomas Madsen “Terminal 2 is a copper farmhouse ale hinting at Spring, and we thought timing was perfect to release it as this year’s Ides of March.”

Terminal 2 will be released today at Henderson with a launch party starting at 6:00 PM featuring samples of the new beer and free sliders from Caplansky’s Deli, which is located in Pearson’s Terminal 3.