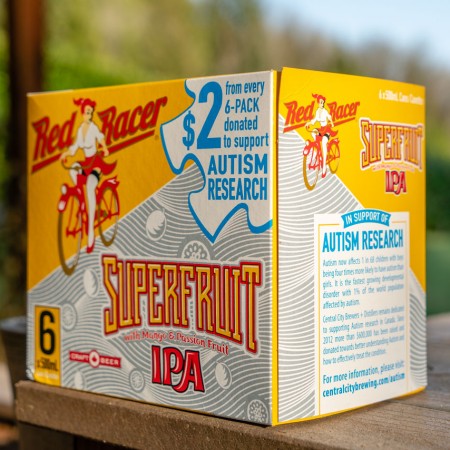 SURREY, BC – Central City Brewers has announced details of its 7th annual promotion for autism fundraising and awareness.

For the 2019 campaign, the brewery is releasing Red Racer Superfruit IPA For Autism, a specially branded version of the mango and passion fruit flavoured Superfruit IPA.

Superfruit IPA For Autism will be available in 6-packs of 500 ml cans and on draught, with $2 per six-pack and 25 cents per pint sold to be donated to autism research initiatives at Simon Fraser University. Contributions of any amount can also be made at the Central City Liquor Store and Brewpub in Surrey, and the Red Racer Taphouse in Vancouver.

For more details and a list of participating establishments, see the Autism Program page on the Central City website.