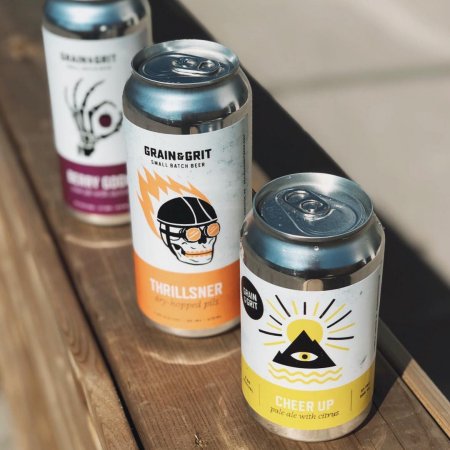 HAMILTON, ON – Grain & Grit Beer Co. has announced details of three new beers that are available at the brewery today.

Berry Good (5% abv, 23 IBU) is a sour ale brewed with lactose, raspberry, black currant and lemon zest. It’s described as having “fresh raspberry and lemon on the nose, followed by a burst of tart berries on the sip.”

Thrillsner (4.8% abv, 30 IBU) is a Bohemian-style Pilsner that was dry-hopped with Citra & Mandarina Bavaria, and features a “stonefruit and citrus aroma [and] tropical flavours up-front with a dry finish and a subtle lingering bitterness.”

Cheer Up (5.5% abv, 31 IBU) is a pale ale with tangerine peel and Meyer lemon zest, which provides a “bright, citrus aroma and flavour [with] sweet grain, tangerine and citrus pith on the finish.”

All three beers are available now in cans and on draught, and their release will be celebrated with a Dover Boys food pop-up at the brewery from 4:00 to 9:00 PM today (March 29th).