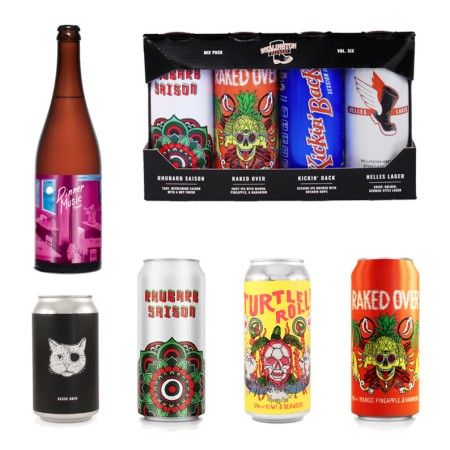 GUELPH, ON – Following the announcement earlier this week about its newest seasonal sampler pack, Wellington Brewery has revealed details of the rest of this month’s new and returning beers.

The releases start today (April 4th) with the Seasonal Mix Pack Vol. 6, which will be available at the brewery and select LCBO stores. In addition, the two seasonal beers in the package – Rhubarb Saison (5.1% abv) and Raked Over IPA with Mango, Pineapple & Habanero (6.9% abv) – will be stocked in single cans at the brewery.

Out next week is Wellington’s 6th annual collaborative release with the Kazoo! Fest music and arts festival, which is taking place at venues throughout Guelph from April 10th to 14th. Kazoo! Brew Festive IPA (5.2% abv) is “juicy and well-rounded with vibrant citrus notes and a balanced bitterness,” and will be available at licensed Kazoo! events, as well as in 355 ml cans at the brewery.

Also set to be released at the brewery on April 11th is Turtle Roll IPA with Kiwi & Seaweed (7.0%), featuring “loads of sweet kiwi flavour with a strong citrus bitterness, stone fruit, and a salty sea like taste on the finish.” And following on April 18th will be Dinner Music Track 2 (4.7% abv), a barrel fermented saison aged on wine lees described as an “easygoing beer, with a mild earthy funk and crisp finish.”