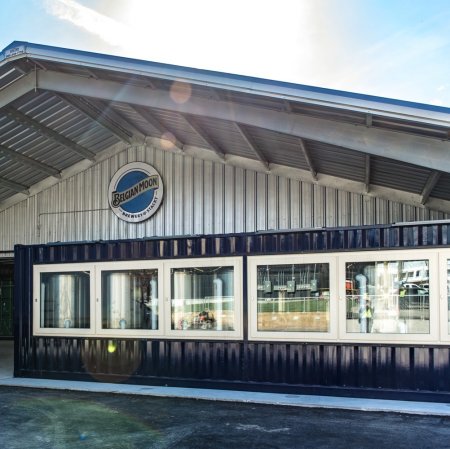 TORONTO, ON – Six Pints Specialty Beer Company – the craft and specialty brand division of Molson-Coors Canada – has announced the launch of a unique new brewing facility in downtown Toronto.

Belgian Moon Brewery – the Canadian trade name for the Blue Moon brand – has opened a mobile brewery and taproom at stackt, a retail market and community hub at the corner of Bathurst and Front that has been constructed out of 120 reclaimed shipping containers.

Details from the press release are as follows:

Equipped with the highest brewing technology, the Belgian Moon brew team will brew fresh and directly onsite, leveraging this unique opportunity to produce small batches of popular variants available in the U.S., such as Mango Wheat, and to test new, seasonal recipes with trend and community influence.

“We’re eagerly awaiting the moment we can host the Toronto community for a freshly brewed pint from this first-of-its-kind shipping container brewery,” said Bill York, Commercial Director, Belgian Moon (Six Pints Specialty Brewing). “Being artfully crafted is at the heart of how we brew, and we are excited to be co-creating arts and culture programming to enjoy throughout the seasons in the Belgian Moon Brewery @stackt.”