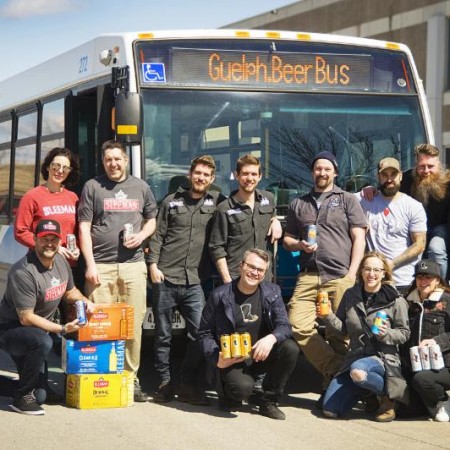 The Guelph.Beer Bus is a free chartered bus that will travel between the breweries – as well as The Fat Duck Gastro Pub – from 12:00 noon to 6:00 PM on one Saturday a month through the late spring and summer. Dates for the service include May 11th, June 8th, July 20th, and August 10th.

For the inaugural run on May 11th, each brewery will be hosting activities and attractions, including hop lessons at Royal City; live music at Brothers; brewery tours at Sleeman; and food trucks at Wellington and Fixed Gear.

The Guelph.Beer Bus is operated by Guelph Transit, supported in part by Guelph Tourism and Regional Tourism Organization 4 through the Destination Guelph Strategic Co-investment Opportunity. Donations will be accepted from riders to support Autism Behavioural Services.

For more details including the pick-up/drop-off schedule for the bus, see the Guelph.Beer website.