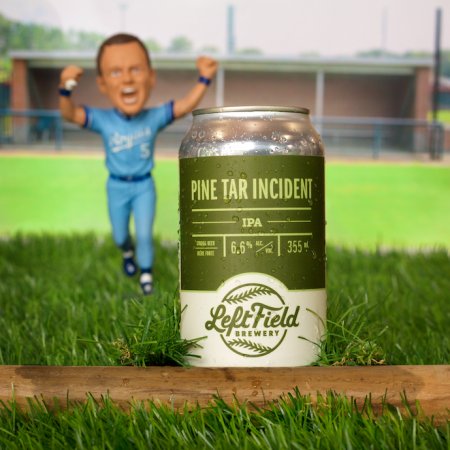 TORONTO, ON – Left Field Brewery has announced the release of a new beer named after one of the most controversial home run calls in baseball history.

Pine Tar Incident IPA (6.6% abv) is a “dank, flavourful, [and] explodes with juicy citrus and a bracing piney bitterness.” As for the name, it has the following back story:

The contentious incident between the Kansas City Royals and New York Yankees took place on July 24, 1983, when George Brett hit a stellar two-run home run in the ninth inning to give his team the lead. The home run was protested by the Yankees when they got a peek of George Brett’s bat, noticing there was pine tar trailing above the legal amount. The home run was reversed, and George Brett went ballistic! He immediately leapt from the dugout in a storm of fury, and his actions led him to get ejected from the game – and it didn’t end there…

Pine Tar Incident is available now on tap and in 355 ml cans in the Left Field taproom, with cans also available via the brewery’s online store while supplies last.