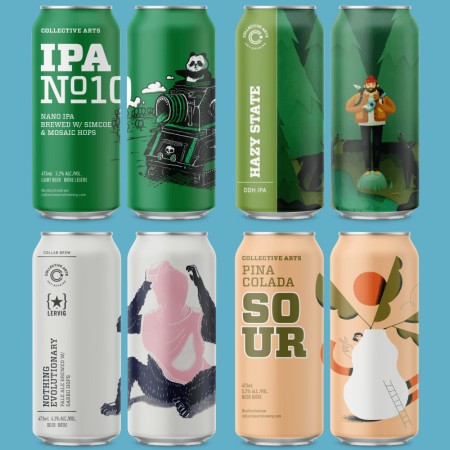 HAMILTON, ON – Collective Arts Brewing has announced details of four limited edition seasonal beers that are set for release through the spring.

Hazy State (4.1% abv) is a “hugely flavourful, yet extremely sessionable Double Dry-Hopped IPA is made with 16 grams per litre of Amarillo, Citra, Mosaic and Centennial hops.” It will be released later this month.

Also out before the end of April will be Nothing Revolutionary (4.3% abv), a pale ale brewed in collaboration with Norway’s Lervig Aktiebryggeri using Norwegian Hornindal Kviek yeast and Sabro hops, resulting in a beer with a “nice blend of tropical fruitiness, pineapple and coconut.”

IPA No. 10 (3.2% abv) – the latest in the brewery’s ongoing IPA series – will follow in May, and is described as a “flavourful, yet extremely sessionable Double Dry-Hopped Nano IPA made with 12 grams per litre of Mosaic and Simcoe hops.”

Later that month, Pina Colada Sour (5.2% abv) will be returning, featuring a “huge amount of toasted coconut added in the Whirlpool, pineapple during fermentation, [and] lactose during brewing to add to the creamy sweetness to complete this warm-weather delight.”

For distribution info and other details on the four new beers, see the full announcement.