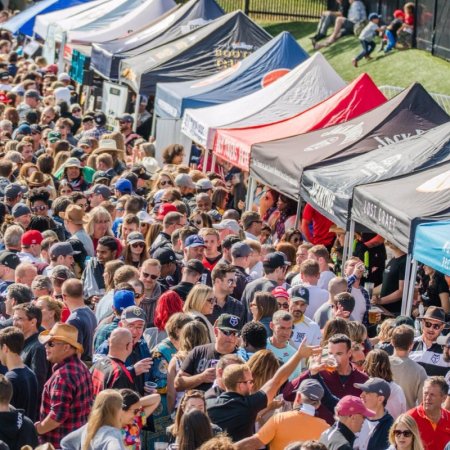 TORONTO, ON – Rugby Football League (RFL) team Toronto Wolfpack has announced the local, national, and international breweries that will be featured in the Craft Beer Garden at home games for the 2019 season.

Presented in partnership with The Craft Guys, the Beer Garden will offer beer from Henderson, Lost Craft, and Innis & Gunn at every game, plus a rotating selection that will include Amsterdam, Big Rock, Collective Arts, Cowbell, Great Lakes, Meantime, MacKinnon Brothers, Muskoka, Northern Maverick, Overhop, Red Racer, Sneaky Weasel, and Woodhouse throughout the season.

Toronto Wolfpack home games take place at Lamport Stadium in Toronto, with the home opener on Sunday April 28th at 2:00 PM, and all other games scheduled on Saturday afternoons at 1:00 PM on various weekends from May to September.

The Wolfpack Craft Beer Garden is located in the north end of the stadium at field level. It opens for service 90 minutes before kickoff, and remains open for two hours following each game with live music and a meet-and-greet with Wolfpack players and opponents.