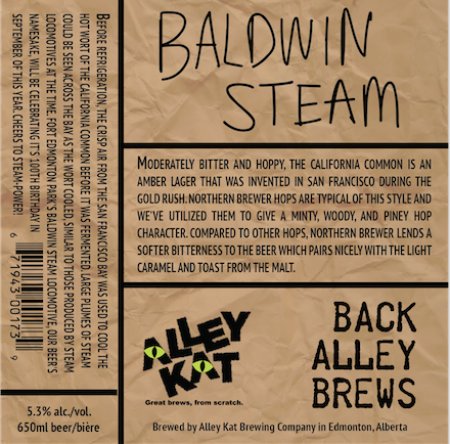 EDMONTON, AB – Alley Kat Brewery has announced details of the latest release in the Back Alley Brews series of limited edition one-off beers.

Moderately bitter and hoppy, the California Common style of beer is an amber lager that was invented in San Francisco during the Gold Rush, where plumes of steam could be seen over the bay as the wort cooled. Northern Brewer hops are typically used in this style and we’ve utilized them to give a minty, woody, and piney hop character, rounded out with the light caramel and toast from the malt. Ain’t so common, after all!

Baldwin Steam is available in 650 ml bottles at Alley Kat and select retail stores in Alberta while supplies last.