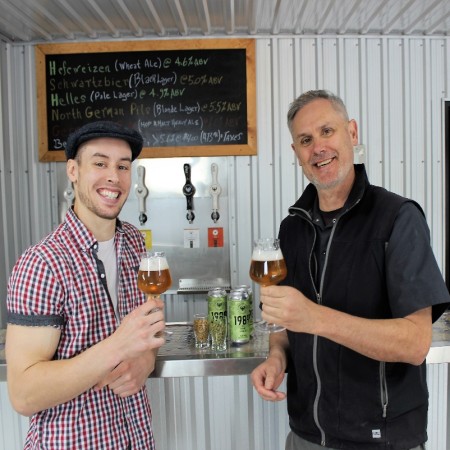 CAMPBELL’S BAY, QC – Brauwerk Hoffman has announced the release of a new beer created as a collaboration between owner/brewer Todd Hoffman and Eric Mainville, a brewer who assisted with the opening of the brewery last year.

Sticking to the German theme of the brewery we decided to pay homage to some German history. In 1989 the Fall of the Berlin Wall was a monumental moment in time. A country no longer divided could finally prosper and allow the best of the West and East to achieve new heights. This hazy hybrid IPA looks to do the same. Blending the tropical fruit flavours and aromas of the West Coast IPAs with the soft and full mouthfeel of the East Coast IPAs, this hopfen nectar is sure to please all hop lovers!

1989 Hybrid IPA is available now in 473 ml cans at Brauwerk Hoffman and local beer retailers. It will also be available on tap soon at select bars and restaurants in the area.