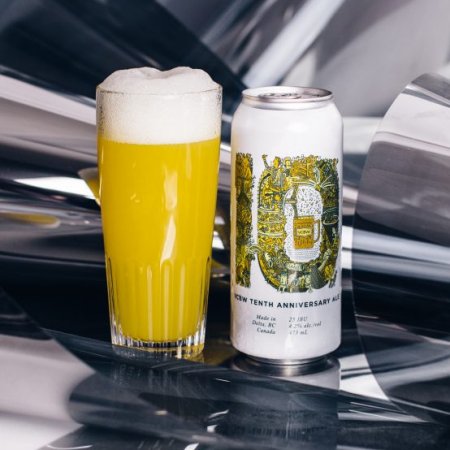 VANCOUVER, BC – The official collaboration beer for the 2019 edition of Vancouver Craft Beer Week (VCBW) is set for release later this week.

This year’s beer was developed by Four Winds Brewing, Dageraad Brewing, and Powell Brewery, and was brewed at Four Winds on April 18th with representatives from more than 30 B.C. breweries on hand for the brew day.

The resulting beer is named Ten (4.2% abv) in honour of VCBW’s 10th anniversary year, and is described as follows:

Ten is a dry-hopped table saison that is bursting with exotic fruit flavours, coming in nice and light at 4.2% ABV, making this an extremely satisfying summer beer. Brewed with tangy Sacch Trois yeast to accentuate the tropical, citrus and stone fruit flavours derived from Sabro and Enigma hops, creating a refreshing and fruit-forward beer. Ten is inspired by historic Belgium classics but brewed with New World hops, creating a very modern tasting beer.

The 2019 VCBW Collaboration Beer will be released in 473 mL cans at Four Winds and on tap at the three collaborating breweries on Friday May 17th. Distribution to select private beer stores, bars and restaurants will follow next week, and it will also served at several events during VCBW, which runs from May 31 to June 9, 2019.

Partial proceeds from sales of Ten will be donated to the BC Hospitality Foundation, a charity that supports people in the hospitality industry facing financial problems due to health issues.