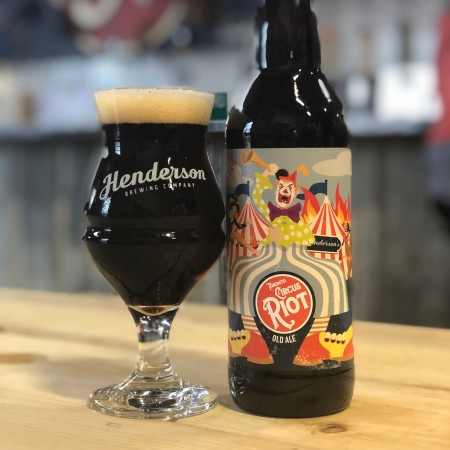 TORONTO, ON – Henderson Brewing has announced details of the latest in its Ides Series of monthly limited edition beers, with this month’s release inspired by “a story of clowns, brothels, corruption, and riots in old Toronto.”

Circus Riot Old Ale (7% abv) is described as “a nutty, caramel-y, complex dark ale that remains pleasantly drinkable.” Its name has the following back story:

The story of the Toronto Circus Riots is truly remarkable: it was a summer evening in 1855 when T.B. Howes’ Star Troupe Menagerie & Circus had come to town from New York State to perform. After a successful show, the clowns decided to visit one of the local brothels, one that was frequented by the local fire brigade, who were less than pleased with the clowns’ arrival. A fight erupted. The firemen and clowns fought – and the clowns won. The next day, the firefighters gathered their allies and tried to burn the circus tent down. Eventually, the police broke up the riot; the circus gathered up what they could and got out of town. The fire brigade was brought to court a few days later to account for the incident – but shockingly none of the police (Orangemen all) could identify the instigators. The city was corrupt – but its citizens weren’t about to stand for it any longer. A new mayor was elected, who promptly fired the entire police force, and Toronto governance was changed forever.

Circus Riot Old Ale is being released in collaboration with LookUp Theatre, who will be presenting a live performance based on the Toronto Circus Riot next month in a location just steps away from the brewery.

A launch party for the beer will be taking place at Henderson tomorrow (May 17th) starting at 6:00 PM, with members of the LookUp Theatre troupe on-hand and performing in costume. For more details, see the Facebook event listing.