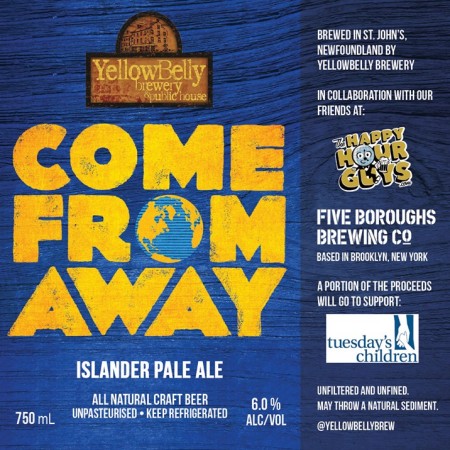 ST. JOHN’S, NL – YellowBelly Brewery has announced the release of a new beer created in partnership with one of the biggest hit musicals on Broadway.

Come From Away Islander Pale Ale (6% abv) was developed as a collaboration with Brooklyn’s Five Boroughs Brewing and The Happy Hour Guys as part of the Broadway Brews series of charity beers.

Brewed with Vermont ale yeast and Cascade, Amarillo, and Cashmere hops, it’s described as “a juicy beer with lots of citrus and stonefruit aromas.”

Come From Away Islander Pale Ale is available now at YellowBelly and NLC stores. A portion of proceeds with be donated to Tuesday’s Children, a non-profit organization that supports those impacted by terrorism and traumatic loss.