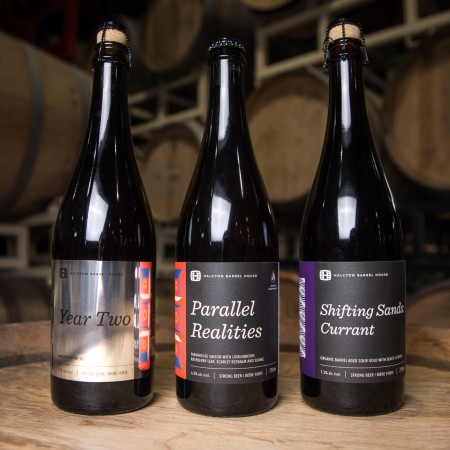 VANKLEEK HILL, ON – Halcyon Barrel House – an off-shoot of Beau’s Brewing dedicated to mixed fermentation and barrel aged beers – has announced details of a trio of beers set for release this weekend for its 2nd anniversary.

Year Two (8.2% abv) is “a unique and truly special blend, a brewmaster’s retrospective of the most well aged and most interesting fruited sours and saisons from Halcyon’s second year of brewing. It includes Shifting Sands (both Cherry and Currant), two different fruited versions of farmhouse saison Curse of Knowledge (lingonberry and baco noir grape), and a tripel as-yet unreleased from the barrel house. It is certified organic, with a fruit-forward profile that emphasizes currant, cherry and wine.”

Parallel Realities (6.2% abv) is “a co-creation of Halcyon and Austin Beerworks from Texas. Both breweries have made a version of this farmhouse saison to release – the botanical ingredients are different based on local terroir to each brewery, but the two renditions are intended to be parallel in thought and process. The Halcyon edition of Parallel Realities is made with organic raspberry leaf and hand-harvested lingonberries, as well as locally foraged scarlet beebalm and sumac. The flavours are delicate with layers of wine, floral, berry and herbal goodness, backed by refreshing tartness.”

Shifting Sands: Currant (7.3% abv) is “the latest in Halcyon’s series of organic sour golden ales with fruit. This edition has black currant as the feature fruit, contributing aromas that are herbal, fruity and peppery, and echoed by a hint of wine. The first sip is upfront acidity, transporting fruity currant and a light spicy character. With spritzy carbonation, moderate tannins help dry out a finish that lingers sour and sweet.”

All three beers will be released on Saturday May 25th in the Beau’s taproom and retail store, where they will be available in 500 ml bottles. In addition, Year Two will be pouring on tap alongside an aged keg of Year One from last year’s anniversary, and food pairings from the Meatings at Beau’s will also be served.