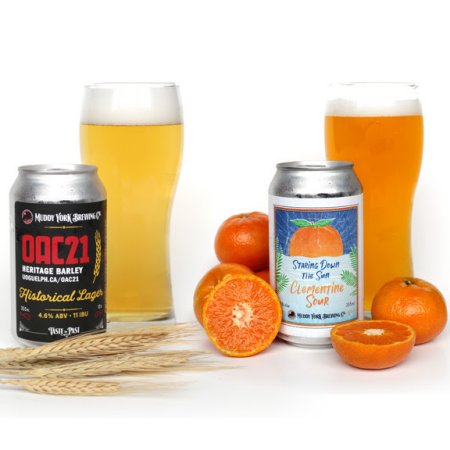 OAC21 Historical Lager (4.6% abv) is a “super refreshing and crisp light lager” with the following backstory:

OAC21 Historical Lager was brewed with a new crop of an old barley, “OAC21.” Originally grown by the Ontario Agricultural College, it was first introduced to farmers in 1910 and soon became the principal malting barley in Ontario. In the 1960s, when producers were not able to harvest the volumes required by Canada’s largest breweries, it fell out of favour. Recently, however, the University of Guelph re-cultivated this heritage grain and generously donated some to us.

Staring Down the Sun Clementine Sour (5.5% abv) is a beer that “balances the tangy sweetness of clementine with the tart acidity of a sour ale. The result is a clean, juicy, and citrusy brew that will shine brightly on your palate.”

Both beers are available now on tap and in 355 ml cans at Muddy York, with cans also available online.