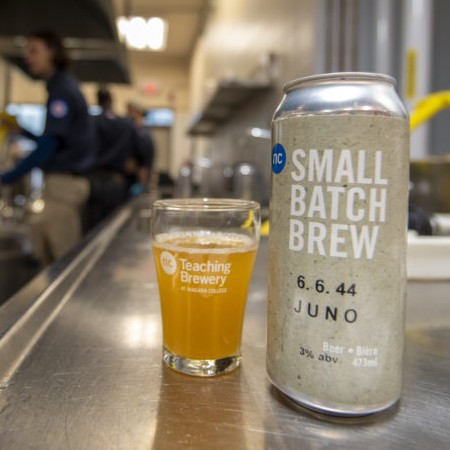 NIAGARA-ON-THE-LAKE, ON – Niagara College Teaching Brewery has announced the release of a new beer to commemorate the 75th anniversary of D-Day on June 6th.

Downing contacted St. Austell’s director of brewing Roger Ryman to ask if he could reproduce the beer, and set out to create a recipe as close to the original as possible. In consultation with Ryman, and various English hops and malt suppliers – including, when possible, those who participated in the original 1944 brew – he created the recipe for Juno.

Juno is a 3% Pale Ale – which was the legal limit during the Second World War due to government restrictions and a hop shortage due to wartime bombings. The commemorative beer incorporates heritage malt varieties as well as Kent Goldings and English Fuggle hops which were used in the original recipe. Similar to St. Austell’s 1944 beer, which used flaked barley and sugar to augment the brew due to wartime shortages of malted grain, and caramel coloring to make it appear as normal as possible, Juno incorporates a light demerara sugar and Black Treacle caramel colouring. The end result is a very light ale with distinct fermented sugar character, lightly hopped but crisp and refeshing.