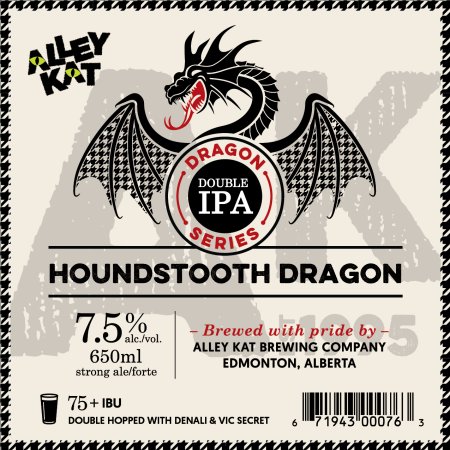 EDMONTON, AB – Alley Kat Brewing has announced details of the next installment in the Dragon Series of limited edition Double IPAs.

While most in the Dragon series are single-hop beers, Houndstooth Dragon (7.5% abv, 75+ IBU) features two types of hops, as the description explains:

Unlike our typical single hopped IIPA, our brewers created an elusive double hopped IPA, Houndstooth. We blended its predecessors: Ebony and Ivory, and the combination of Vic Secret and Denali hops created this beautiful and bold Dragon that is both citrusy and foresty. This Baby Dragon is fierce!

Houndstooth Dragon will be released on Thursday June 6th in a limited run of 650 ml bottles that will be available at the Alley Kat brewery store and select liquor stores and bars in Alberta while supplies last.