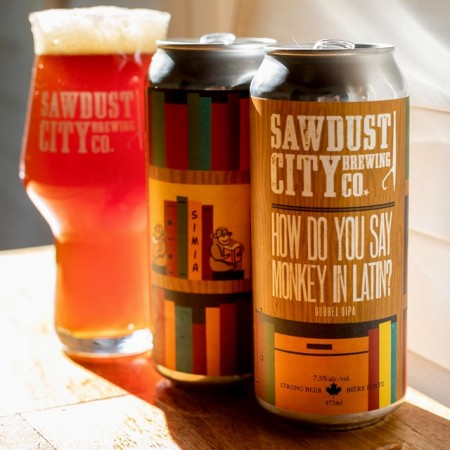 GRAVENHURST, ON – Sawdust City Brewing has announced that a collaboration with Quebec’s MicroBrasserie Charlevoix will be the 23rd of its 52 weekly beer releases for 2019.

How Do You Say Monkey In Latin? (7.5% abv, 28 IBU) is the updated version of a beer that the two breweries originally made as a three-way collaboration with Black Oak Brewery back in 2012. It’s described as follows:

The beer shines with the malt body of a Dubbel, yet is fermented low like a Brut IPA. It’s dry-hopped big-time; think American Double IPA on the backbone of a subtle Belgian yeast strain. Admittedly, you probably haven’t had anything quite like it, but this one has something for everyone! It is irresponsibly hopped with an insane amount of Mosaic, Nelson Sauvin and Galaxy hops. How Do You Say Monkey In Latin? is a mind-melting blend of hops and malt. It brims with aromas of berries, grapes and stone fruit while remaining super dry and easy to enjoy.

How Do You Say Monkey In Latin? will be released tomorrow (June 6th) and will be available at the Sawdust City retail shop and online store, as well as select beer bars in Ontario, while supplies last.