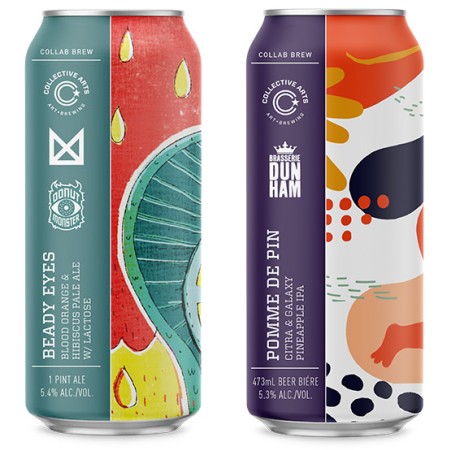 Inspired by one of Donut Monster’s distinct flavour creations, we brewed this pale ale with generous amounts of bright blood orange and hibiscus, backed by a large amount of citrusy hops. To round out the donut feel, we added lactose sugar for an extra creamy body.

Pomme de Pin (5.3% abv) was created with Quebec’s Brasserie Dunham, and is described as follows:

[A] crushable summer IPA with loads of Pineapple. Big tropical Pineapple flavour and aroma and backed up with even more punch from a generous hopping of Citra and Galaxy.

Pomme de Pin is available now at the Collective Arts retail store and taproom, and Beady Eyes will be released there tomorrow (June 7th) – fittingly National Donut Day – with free Donut Monster Blood Orange Hibiscus donuts for customers who buy a 4-pack of the new beer.