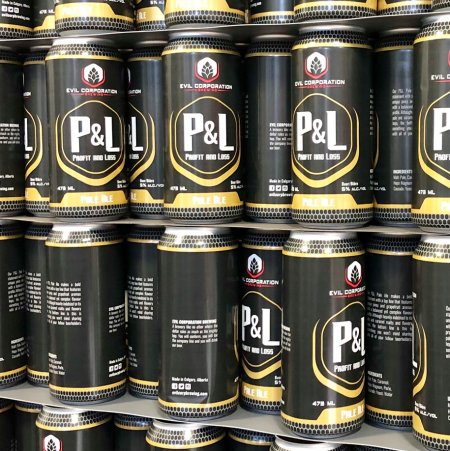 This somewhat traditional new world Pale Ale pours a vivid golden colour with a sturdy, effervescent head. An initial sweetness brought on by the extensive use of Caramel malts is your introduction to this beer’s flavour profile. It then leads your taste buds on to a crisp freshness and light hop profiled journey made for everyday drinking. It’s fleeting essence finally leaves your mouth with a satisfying and unique pithy piquancy that will have you longing for that next sip.

Established last year with a mission to “brew the best beer possible but at the same time skewering business speak and the connotations that come with it,” Evil Corporation is currently brewing under contract at Last Spike Brewery.

Profit & Loss Pale Ale – as well as the company’s first release, Initial Public Offering IPA – is available now in cans at select liquor stores and on tap at craft beer bars in Calgary.