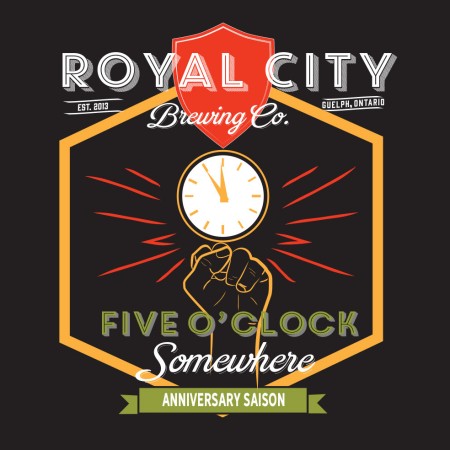 GUELPH, ON – Royal City Brewing has announced details of a new beer to be released this weekend in celebration of the brewery’s 5th anniversary.

Five O’clock Somewhere is a showcase for the high quality ingredients we have right here in our surrounding community. It features malt from Barn Owl, a malt house located in Sterling, who employs the traditional, hands-on methods of floor malting to produce an amazing final product. The hops were grown in Aylmer at Hayhoe Hops, and the yeast was procured just around the corner at Escarpment Labs. We also added Blueberry Blossom Honey from Tuckamore Bee Company here in Guelph. Sourcing local ingredients not only allows us to support and work with smaller scale producers making high-quality products, but it also gives this Rustic Saison an all important sense of time and place. It is a representation of fresh local ingredients, and an expression of gratitude to our community.

Five O’clock Somewhere will be released tomorrow (June 15th) during a 5th anniversary party that will kick off at 2:00 PM, and will feature food vendors, live music, a climbing wall, and a virtual reality station. For more details, see the Facebook event listing.