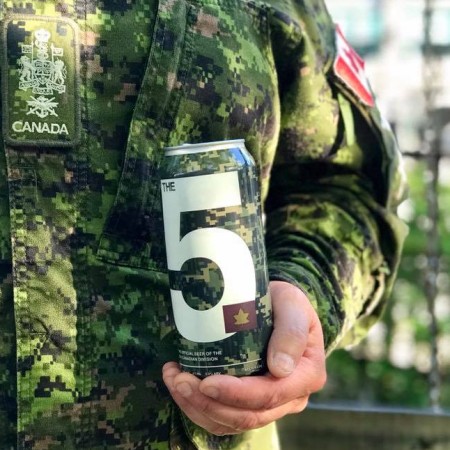 SHEET HARBOUR, NS – Sober Island Brewing has announced the release of a new beer that pays tribute to a local military division.

The 5 (5% abv, 5 IBU) is a blonde ale developed in collaboration with Commander Brigadier-General D.A. Macaulay and members of the 5th Canadian Division of the Canadian Army. Atlantic Canada Beer Blog provides the following tasting notes:

It’s a super-easy drinking blonde ale that’s low in bitterness, but not on flavour. A touch of honey malt gives it a touch of roundness, Magnum, Cascade, and Mt. Hood hops provide a hint of bitterness and some gentle hop flavor, and an American ale yeast ensures a well-attenuated beer with a crisp finish.

The 5 was released last week in time for the Division’s Change of Command to Brigadier-General R. Pelletier this past Saturday. It’s available now in 473 ml cans at private liquor stores in Halifax, with distribution to other Atlantic provinces being eyed for the future.