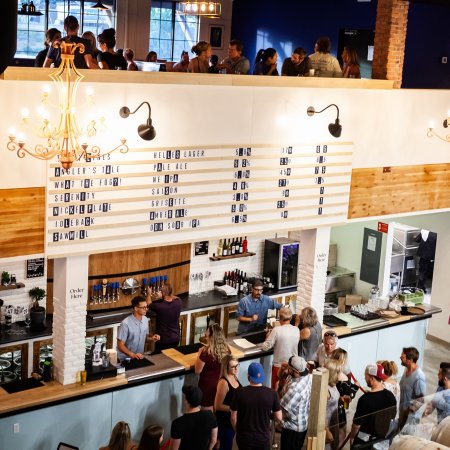 Originally planned to be called Hatchery Brewing until a recent legal dispute forced a name change, Slackwater features a large two-level bar and restaurant that is described as follows:

Making full use of both levels of the building, Slackwater’s ground floor plays host to a large, open taproom wrapping around its brewery with a stage for live music and garage doors leading to a streetside patio. Upstairs a parlour games lounge, dining room, rooftop patio and private dining room all get their own double-sided bar looking down onto brewmaster Chris Vandenberg’s custom built 10 hectolitre brewing system. It’s look is clean, modern and bright with hits of water-colour tones and wood throughout, a collaboration with designer Jennifer Robinson of Guerard’s Fine Furniture.