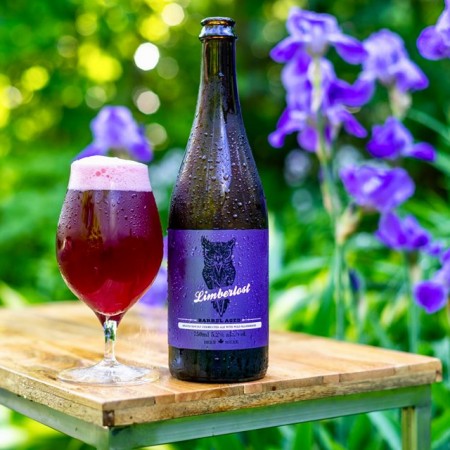 GRAVENHURST, ON – Sawdust City Brewing has announced that this year’s edition of an annual barrel-aged wild ale will be the 26th of its 52 weekly beer releases for 2019.

Limberlost (5.2% abv) is brewed using a wild yeast strain foraged near the brewery, and the 2019 vintage is described as follows:

Born in the wilds of the nearby Limberlost Forest this spontaneously fermented tart ale pours a beautiful deep blue and has aromas of fruit and dusty farmhouse funk. Using our wild yeast strain captured from Limberlost forest, aptly titled “The Limberlost,” this year’s version is tart without being overly sour. It drinks very easily with the wild blueberries balancing out the farmhouse flavour. The blueberries dominate through to a nice dry finish accompanied by a lively carbonation.

Limberlost will be released tomorrow (June 27th) and will be available at the Sawdust City retail shop and online store, as well as select beer bars in Ontario. It is also the official beer of the 2019 edition of Funkfest, a sour and wild ale festival taking place at the brewery on Saturday June 29th.