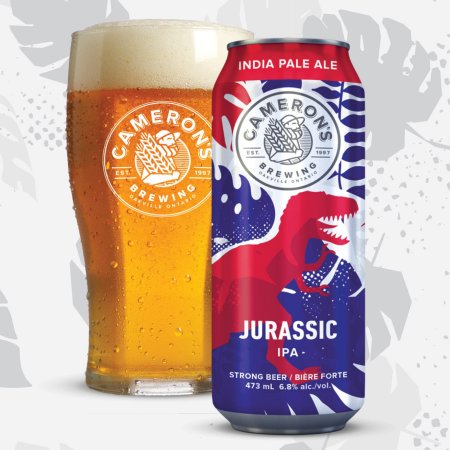 OAKVILLE, ON – Cameron’s Brewing has announced the release of a new year-round beer that “has a huge presence and won’t be ignored”.

Jurassic IPA (6.8% abv, 68 IBU) is hopped with Citra, Summit, and Simcoe, and described as follows:

A golden hue greets the eyes while the nose is welcomed with citrus, grapefruit and mango aromatics thanks to the well balanced use of citra, summit and simcoe hops. Jurassic IPA starts simple but becomes more complex with each sip. The body’s clean effervescence bubbles forth with juicy vibrant fruit tones and finishes crisp and clean.

Jurassic IPA is available now in 473 ml cans at Cameron’s and LCBO locations, and will be stocked at select licensed grocery stores in Ontario starting later this summer.