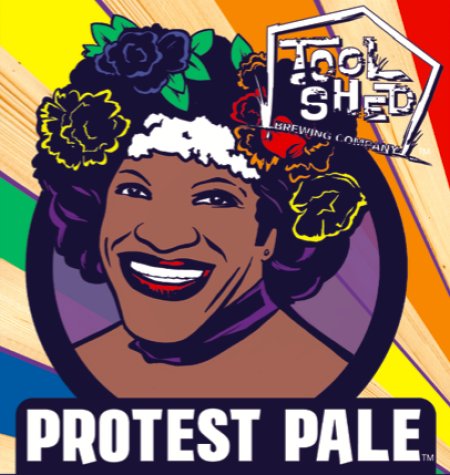 CALGARY, AB – Tool Shed Brewing has announced that it will soon be releasing the first ever collaborative beer from members of the LGBTQ+ community who work in Alberta’s brewing industry.

Representatives from Blindman Brewing, Freehold Brewing, High Line Brewing, Last Best Brewing, Trolley 5 Brewpub, and Yellowhead Brewing were all on hand at Tool Shed yesterday to participate in the creation of Protest Pale, which is “a NE style pale ale which is a lowly bitter citrus bomb. Citra and Mandarina Bavaria hops will do their thing to provide a powerful citrus character, but it will boast of a smooth, pillowy body, too.”

Featured on the Protest Pale label is Marsha P. Johnson, the transgender woman of colour who played a key role in the legendary Stonewall riots that occurred in New York City 50 years ago this weekend, triggering the Pride rallies, demonstrations, and celebrations that continue to take place globally to this day.

Protest Pale will be released in mid-July.