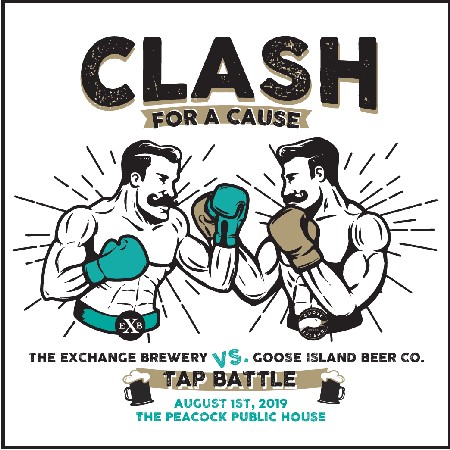 TORONTO, ON – Toronto’s Goose Island Brewhouse and The Exchange Brewery in Niagara-on-the-Lake have announced details of a “friendly tap battle” to raise funds for charity.

Clash for a Cause will take place on Thursday August 1st starting at 6:00 PM at The Peacock Public House (582 College St., Toronto), and will feature three beers on tap from each brewery. Attendees will be encouraged to vote for their favourite beer, and the brewery that gets the most votes will win bragging rights over the other.

The evening will also include snack stations with food from the Peacock kitchen, music from resident DJ Tim North and special guests, and prize giveaways.

Tickets are available online for $20, which includes admission and a beer sample, with tickets for additional beer and food samples available at the event for $5 each or 6 for $20. Partial proceeds will be donated to the Pink Boots Society as chosen by Goose Island Brewhouse, and United Way Niagara as chosen by The Exchange Brewery.