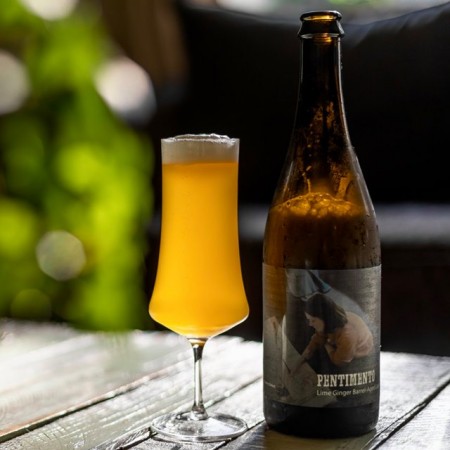 GRAVENHURST, ON – Sawdust City Brewing has announced the latest instalment in its Winewood Series of wine barrel-aged beers the 29th of its 52 weekly beer releases for 2019.

Pentimento (5.7% abv) is described as follows:

Pouring a gentle, hazy golden hue, this barrel-aged lager offers a brisk aroma of lime, oak and funk. Your first sip introduces those lime, funk flavours at the forefront, then fade into a nice ginger spiciness on the finish. Uncharacteristically, for a barrel-aged beer, this beer is remarkably simple, drinkable and perfect for a summer day. The off-dry finish begs you to come back for more. Don’t worry the funk loves the sun too!

Pentimento will be released tomorrow (July 18th) in a limited run of 750 ml bottles at the Sawdust City retail shop and online store.